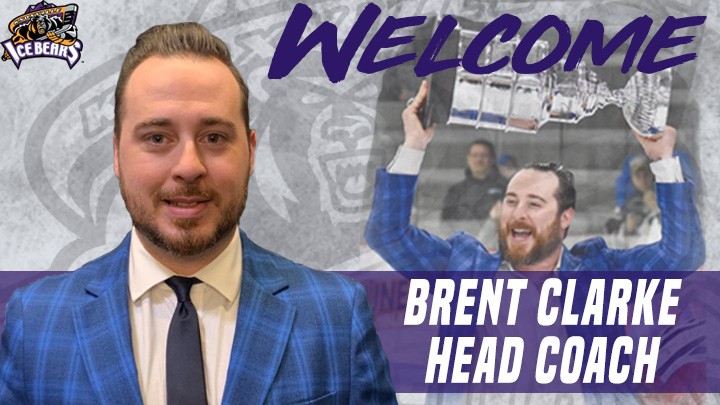 The Knoxville Ice Bears have agreed to terms with Brent Clarke to be the organization’s seventh head coach in franchise history. Clarke comes to Knoxville from Watertown in the FPHL where he led the Wolves to the Commissioner’s Cup as the league’s 2022 playoff champion. He also won a title as the team’s head coach in 2015. He was named the league’s Coach of the Year in each of those seasons.

He replaces Jeff Carr, who accepted an assistant coaching position with the Norfolk Admirals of the ECHL after being named the 2021-22 SPHL Coach of the Year. Clarke served as Knoxville’s Assistant Coach under Carr during the 2020-21 season when the Ice Bears finished second in the league.

“I’m extremely excited to be back in Knoxville and would like to thank [Owner/President/GM] Mike Murray, [Executive Vice President] Dave Feather and the Ice Bears ownership group for this opportunity,” said Clarke. “I look forward to the challenge of putting my own spin on things, but continuing the winning tradition here in Knoxville.”

“I enjoyed my time here as an Assistant Coach. Everything here is first class and I can’t wait to drop the puck come October in front of the best fans in the SPHL.”

Clarke has also been the Head Coach in the FPHL with the Elmira Enforcers. He led the club to the Commissioner’s Cup finals in 2019, where Elmira lost to Carolina.

As a player, Clarke spent five seasons in the SPHL, winning a President’s Cup with Pensacola in 2013. He also appeared in 167 combined games across the IHL, CHL and ECHL, as well as 71 games in the FPHL. Clarke brings his championship pedigree to Knoxville, where the Ice Bears are coming off a SPHL-record 42 wins last year en route to the franchise’s fifth regular season title.

“I want another cup,” he said.

Knoxville will open its 21st season on Friday, October 21 at the Knoxville Civic Coliseum.